How Can “The Largest Board in Organized Real Estate” Conduct Motions in this Manner?  Can someone please explain because right now I am confused.  I am all for change and modernization but what was that??????
Firstly, we approve an Agenda for a meeting that was clearly not followed.  As a matter of fact, we start the By-Law discussion and then cut if off mid way through for the Mayoral Debate YET it clearly stated on the Agenda that the Bylaw Changes were after the Debate.  So what is more important here?  Accomodating a bunch of Mayors who basically had a chat by themselves because the room was half empty.  Secondly, we were in the middle of the By-Law debate when we broke it off to allow for the Mayors little tete a tete. 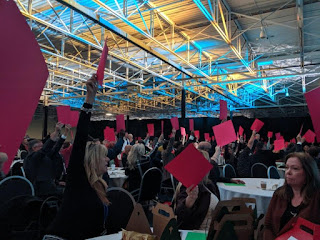 During the wait time, many people actually left !!!   I had two people hand me “RED CARDS”
outside of the room and said I have had enough and this is taking too long, I have to go and left.  Those red cards could not be used or voted.
So when we reconvene, they then proceed to take the Vote… and it appears to look like a mass of green paper and then a mass of red paper.  Impossible to count clearly.  From my view, it looked like red had more, to the point where a person who voted “for” the Motion said, we lost… so it wasn’t just me.  Then much to my surprise, the President says, we are going to do it again, it is too close to call !!!  Wait, what????  Too close to call?  So we lift our cards again, this time to have 3 or 4 TREB staff wander the room counting pieces of paper in the air.
How on earth can a Board function like this??  55,000 members and maybe 1,000 they announced were in attendance and at the end of the second vote, they say, the Greens win …. After a bit of an outcry from the members, asking for recorded votes, etc.  They say no the Yes vote wins.  We then ask by how much?  It turns out to be 10 votes.  10 green pieces of paper more…. Really?  That is how we are going to run our Board?
Who monitored if someone held up two pieces of paper?  And I think they said it was 168 to 178 …. Well that barely equals 350 – so what happened to the so called 1,000 people they said were there.  They left !!!   But they can pass a Motion with a 10 vote difference.  And who were these mystery counters????  Treb Staff????  Really????  So 650 people were missing?  Funny, we can register using QR codes on our phones but vote like an episode in the  Flintstones.
To say I am disappointed is putting it mildly.  I also had agents from our office drive from Pickering out to Etobicoke to participate in this process and truly, they were shocked at the way it is done.  How on earth do you expect members to get involved when from the first onset, none of it has followed any kind of protocol.  It was embarrassing.  If this was a Union Meeting, there would be a riot !!!  They would lock the doors during a vote and not have people walking in and out of a Trade Show.  This is our industry and the future of it depends on these Motions and By-Laws.  Shame on you.  Not on the Motions – on the fact that you allowed our Association to become a complete joke !!  I for one, has never seen such a mockery of a vote.  We don’t have other ways to get people to vote?  Electronically, sign a piece of paper and count it at least – but today was a sad day.
I have sat on the TREB Board for 6 years and I know they work for free and they do their best for the most part but what went on today was atrocious and I for one, am ashamed to a member of a Board that conducts themselves like this.  I am sure I am not alone.
Good luck getting more members to vote and participate.  Shame on you !!